Why Writers Should Embrace Their Weird Side

Debut author Sarah Sover shares with Writer’s Digest how embracing her weird side led to the publication of her first book… Support our news coverage by subscribing to our Kindle Nation Daily Digest. Joining is free right now! 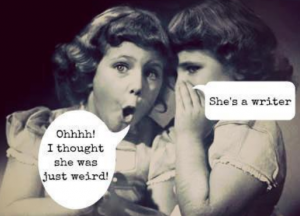 I was always going to be a writer. Well, that or the next vampire slayer, but I was never called, so writing became my calling. In ninth grade, I was sure I would be the kind of writer who changed lives and made a positive impact on the world. I only read classic literature and books like The Alchemist and The Celestine Prophecy, and I wrote poetry. Really bad poetry. And I was weird.

The day the teacher told her class to open their textbooks to a page featuring a photograph of the Giza Plateau, she had no way of knowing the quiet new girl was obsessed with the Great Pyramid. She hadn’t seen the cross-sectional diagrams detailing the structure scribbled into the margins of every notebook I owned, complete with hidden shafts and star orientations above. She did the absolute worst possible thing she could do. She asked the class if anyone knew what we were looking at. I took a deep breath, raised my hand in a tentative, jerky motion, and decided to speak for the first time in the weeks we’d been meeting. When she called on me, I felt my cheeks burn and my stomach twist as my adrenaline spiked. I launched into a full-on diatribe about perfect angles, constellations, ancient civilizations, historical cover-ups, and the potential for life on other planets. Halfway through my speech, I made a fatal error. I looked up. The entire class was staring slack-jawed in my direction. I trailed off to a stutter, then to awkward silence, and the class followed suit. It was the kind of silence that thickens the air.

“You’re weird,” proclaimed a boy from a few desks away. The class erupted in laughter, and I focused all my non-existent powers on willing myself invisible.

Weird. It’s a word that’s followed me around. In my younger days it was my own, personal Beetlejuice, a thing that would become real if muttered three times. Here’s the thing, though: I am weird. I just wasn’t ready to embrace it yet. I didn’t want to be weird. I wanted to be the next Charlotte Brontë, Robert Frost, or Daniel Quinn.

I interviewed for the Bell Honors Program my senior year, an interdisciplinary, team-taught approach to education in a small group atmosphere. Despite having blown the Governors’ Honor interview the year before by impersonating a largemouth bass when asked to name a single author I admired, I was surprisingly at ease during the interview, speaking freely and candidly. On the way home, I just knew they saw me for what I was. Weird. When I got home, there was a message waiting with an offer into the program. I was exactly what they were looking for, it said. And Dr. Joiner was right. The program was perfectly suited to the way my mind makes connections. For once, I didn’t feel so weird.

The first week of college, it rained. There was a huge puddle outside the dorm. Nobody was around, so I jumped in. The next thing I knew, my little puddle turned into a pit of reckless, muddy frivolity. I was body-slammed into the mud by one of the 15 or so classmates who joined me. It was awesome. I found my place and my people. At some point during those days, I scribbled a scene about the sentient wind seeking help for a girl who served as a vessel for magic. I stuffed that story away and went to a kegger, forgetting its existence for years.

When college ended, I entered a world where once again, I was weird. I liked progressive metal, writing, caring for injured wildlife, and swing dancing. None of my interests overlapped, I felt like an outcast within each of my individual communities, and my poetry went through a dark phase. I started to think that if I felt so isolated in my weirdness, so must all my fellow misfits, so I began a concept piece called “Identify” comprised of poems, flash fiction, and other randomness. I thought I could connect us all, and I still wanted to change the world with my writing. “Identify” never felt complete. I struggled with believing I had the focus to write an entire book, so for the longest time, I didn’t.

Eventually I found the opening to that story I’d penned in college. It was pretentious. It was lofty. It was all in passive voice. But in my head, I could see Nithya, hair swirling around her, light and dark magic combined in a single form, being hauled off by a sorcerer. From that one scene, I created The Key of Argos, a 130K-word epic fantasy with a lazy title, and I proved something to myself—I could write a book. While the plot was heavy on tropes, the heart of the story was unique. There was something special here, but I was still putting too much pressure on myself.

I started my second book after a ridiculous conversation with my husband, another weirdo. It was a snowball of absurd ideas culminating in the concept of a crew of specialist trolls pulling a heist in broad daylight. I wrote the book with no expectations, no pressures to change the world or conform, no plans for the future. I wrote it simply because the idea of grog-chugging, baby-eating trolls starring in a sitcom version of Oceans 11 made me laugh. It was weird, but it was meant to be.

When I hit the query trenches, I got only complementary or form rejections. The only real feedback I got was that humor is a hard sell. I was still in the midst of querying when I saw the acquisitions announcement from The Parliament House, and it included four edgy, weird fantasy titles. That’s when I realized that a small press may be the perfect place for my niche story.