After some major rewrites based on my Editorial Review from the Steve Parolini, the Novel Doctor, I gave my thriller novel ‘Pentecost’ to seven beta readers and asked for their feedback.

This is one of my honest, personal posts! I hope it helps you on your writing journey.

Who are beta readers anyway? 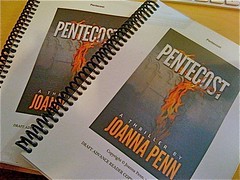 Beta readers read your book prior to it going to the printer. You  could also use them before submission to an agent or publisher. They  read the manuscript for comment on the structure, characters, plot as  well as grammar/spelling or anything else they notice that may need  revision.Their comments will generally result in another rewrite  although of course you don’t need to action everything. Beta readers  should be people who like the genre you write in, and also need to be  able to give honest feedback. There is no point in just hearing praise  at this stage. Criticism only makes our work better!

The practicalities of working with beta readers

I selected five of my friends who read in similar genres as me i.e.  fans of thrillers, crime, mystery and fast paced novels. I also asked a  writer friend I respect, the lovely Alan Baxter and also my copy editor (who just happens to be my Mum – lucky me!)

I gave them a hard copy A5 version of the book I had printed locally (above) so it was easier to review and make comments on. I also included a letter indicating the comments required  i.e. grammar and spelling would be done by my copy editor but I wanted  feedback on character, plot, any parts they skipped over or found  jarring as well as general comparative notes on other books vs mine.They  had three weeks to read it and provide feedback.

I received feedback in the form of marked up A5 books, an interview  style discussion and brainstorming as well as phone calls, during which I  took copious notes with page references. The most heavily marked up  version was from my copy-editor (to be expected).

For the next step, I took my own hard copy of the novel and added comments and notes from all the beta readers. Blue writing is for word changes, tense issues and grammar. Red is for more rewriting needed. Finally, I went through another full rewrite fixing everything from that master draft. 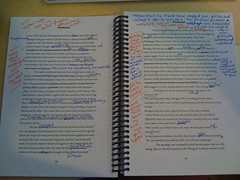 I had a few depressed days as I considered the extent of the feedback! I  had thought I was 95% complete but it was actually more like 85%. Going  through another full rewrite was not on my schedule and by this stage, I  was pretty sick of the manuscript! BUT/ the whole point of the beta  reader review and copy edit was to ensure that a quality product is  released in Feb 2010.

Some of the good feedback included:

In the spirit of full disclosure and learning for us all, here is some of the constructive criticism received:

Not a page was untouched in the edit

One of my beta readers also came up with some brilliant additions to  the plot which I’m adding in with his consent. It made me think that I  need to give the book to readers earlier so I can expand on the plot at  an earlier stage.

From this I learned a few very important points:

Have you used beta readers and copy editors? What have you learned from the process?