Doesn’t that pretty much describe all great novels? Yet according to librarians and bookstore owners, traditional labeling defines thrillers as fast-paced, realistic books that focus on plot more than character and have a high-stakes conflict as the heart of the story. And by high stakes they mean a lot more than a single life—or a series of selected lives—must be at risk. Whole cities or ways of life must be in peril.

But now, with many writers labeling their own work, just about any story with a crime or an element of suspense is called a thriller. Just as one example, Amazon’s #1 book on the thriller list is Gone Girl by Gillian Flynn, a story of a marriage gone bad and a missing wife. It’s all about the characters. Readers love the story and many have labeled it thrilling, and being a fan, I plan to read it. But it’s not technically a thriller. 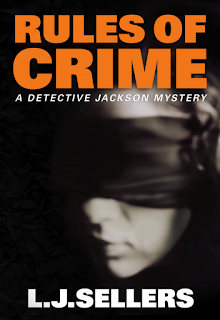 (Above: My new book sure looks like a thriller)

As a member of International Thriller Writers, I’ve written many features about new releases for the Big Thrill newsletter. With some, I’ve scratched my head and thought: Why is this called a thriller? The stories usually sound terrific, but still, I would call them paranormal suspense or historical mystery.

But I’m guilty of thriller labeling too. My Detective Jackson series falls under crime fiction, police procedurals, mysteries, and suspense. But a year ago, I added the word thriller to the subtitles (Detective Jackson Mystery/Thrillers) to let readers know that they aren’t traditional mysteries that can be solved at a leisurely pace and that there is plenty of action and a major element of suspense.

Also, labeling the novels thrillers expands their metadata and allows more readers to find them. But are they really thrillers? Traditionalists would probably say no. Murders, assaults, and robberies in a midsized Oregon city don’t represent high-stakes conflict. My new publisher, Thomas & Mercer, doesn’t plan to use the thriller label. So in January, the series goes back to being the “Detective Jackson Mysteries.” But I hope Amazon lists the books in the thriller category, anyway.

Because I want to reach as broad an audience as possible. Still, I wonder how much readers care about labels. Some readers love thrillers of every kind, and they judge a book by its cover, description, and word of mouth reputation, rather than by its category. Other readers actively dislike thrillers, and won’t bother with any book labeled that way. Further discussion reveals that what they mean is they don’t like spy stories or novels with big explosions or long chase scenes. So for some readers, thriller can have a negative connotation.

My website says “Author of provocative mysteries & thrillers” and I’m happy with that. In addition to my Jackson series, I have three standalones—all highly suspenseful, but with no spies, explosions, or car chases.

What does the term thriller mean to you? Does the label make a book more enticing?

This post, by L.J. Sellers, originally appeared on the Crime Fiction Collective blog and is reprinted here in its entirety with that site’s permission.