He calls it “A Newbie’s Guide to Publishing“, but don’t think for a moment that Joe Konrath hasn’t been to Night School. As I have already discussed in the Kindle Nation newsletter, Joe is my eye idea of an author who is working hard at connecting with his base of readers. As a direct consequence, that base is expanding by leaps and bounds. 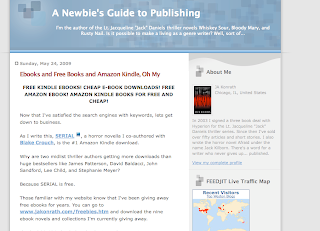 Most recently, due in part to some nice symbiosis between Joe and Kindle Nation, “his” novel Serial has soared to the #1 bestseller position, among 290,000 Kindle books, in the Kindle Store. (Why the quotation marks around the word “his”? Because Joe’s the human behind the Jack Kilborn pen name.)

Joe is also the successful author of the Jack Daniels suspense-with-an-edge series, hold the garnish and the little umbrella, that began with the 2004 publication of Whiskey Sour.

If you are an author or independent publisher who wants to learn how to work the new technologies to find your readers, here are two suggestions:

Kindle Blog headcount approaches 5,000, but … Readers? That’s another story
THE FEEDBACK IS THE FILTER: WHO WILL DISTINGUISH QUALITY IN AN INDIE PUBLISHING FUTURE?