By Steve Windwalker on May 2, 2015 in authors, Uncategorized

When you set up a Kindle Countdown deal, the KDP system allows you to set a beginning date on a screen that looks like this one:

All well and good. But it’s easy to miss the fact that this screen’s default starting time is 8 am Pacific.

And if you are trying to coordinate a promotion campaign that starts on the same day as your Kindle Countdown Deal, that 8 am Pacific time could be a disaster. After all, just as one example, promotions at BookGorilla and Kindle Nation generally have a copy and pricing deadline of 6 am Eastern, which translates (for the time-zone challenged) to 3 am Pacific. (And we’ve heard that the folks at BookBub try to get up early, too.

One thing you can do, of course, is to have coordinate your promotion so that it starts on the second day of your Kindle Countdown Deal. But you may feel like you’re giving up critical promotional time if you delay your promotion that way.

But here’s some really good news, if you haven’t noticed it before:

There’s an easy to miss time-of-day pulldown menu on that same screen that we showed you above. Just click on the default time and the pulldown will appear, as in the screenshot below. Select 12 am Pacific and you should be fine for all purposes … as long as the KDP gremlins cooperate! 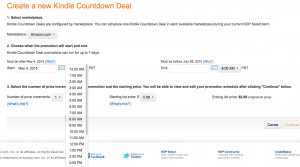 The One Small Detail That Can Derail Your Kindle Countdown Deal