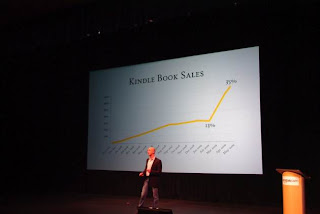 If so, there has been plenty to chew on in the last few days.

Let’s just establish up front that, in the long run, the most important Kindle sales numbers involve calculations of how many Kindle books — or any other e-books, for that matter — are being purchased and downloaded. Those are the numbers that are going to make a difference to authors, publishers, readers, and booksellers of every variety. For instance, it may be a good thing for Sony that the company has sold XXXX units of its ereaders in Japan, say, or globally. But until I see evidence that publishers and authors are experiencing significant sales of their ebooks to Sony device owners, those hardware unit sales numbers won’t have traction for me.

On the subject of U.S. ebook sales, let me suggest the following very interesting and informative posts and links….

Joe Konrath’s A Newbie’s Guide to Publishing: You may already be familiar with Joe Konrath (or his alter-ego-de-plume Jack Kilborn) via Kindle Nation Daily, but in addition to being a fine author of suspense and horror fiction Joe is engaged very actively in experimenting with and thinking and writing about the world of book publishing from an author’s perspective here in 2009. Joe has shared more information about actual Kindle edition sale and royalties, overall ebook downloads, and his approach to marketing and promotion than any other author writing today, and there’s plenty to learn from what he has to say in his posts Ebooks and Free Books and Amazon Kindle, Oh My; Helping Each Other and Amazon Kindle Numbers.

Morris Rosenthal on Kindle Sales Rankings: On another front, the guy who has done more than any other commentator to parse Amazon Sales Rankings and their meaning over the past decade, author and indie publisher Morris Rosenthal of Foner Books, has turned his attention very useful to the meaning of Kindle Store Sales Rankings in a recent post entitled How Many Kindle eBooks Are Selling Based On Amazon Sales Ranking. Although I believe Morris is off by about 600,000 in speculating that there are about 600,000 Kindles currently in use, his overall calculations and research are very well-founded and they strongly suggest that Joe Konrath and I will soon be joined by hundreds — and eventually thousands — of other authors for whom revenue from Kindle sales alone begins to provide something like a livable income. Morris also makes a fascinating argument that, among those of Amazon’s top bestselling titles that are available both in print and Kindle editions, there is now a 1:1 ration in sales units between the two. When seen in an overall context wherein this ratio moves strongly in favor of print editions as sales numbers decline out the long tail, this model seems generally consistent with Amazon’s recent (and, at the time, stunning) announcement that, looking back over an unspecified historic period, Kindle editions sales had accounted for somewhere between 26 and 35 per cent of all sales when both print and Kindle editions were available. If you want to be present and accounted for as the ebook revolution continues to unfold, I highly recommend you follow Morris’ posts.

Indie Authors and the Kindle Bestseller Lists. Even among bloggers who write about all things Kindle, there is occasional some confusion about, well, all things Kindle. Among those who commented on the above posts by Joe Konrath, one blogger focused on what Joe’s success might mean for self-published authors. (Joe, by the way, is not a self-published author, although he is certainly one who is taking the bull by the horns and restructuring the traditional hierarchical relationship between authors and publishers). Trying to focus in on whether “self-published” authors could earn “a decent living” publishing for the Kindle, the author of the iReaderReview blog asked his readers “Do you think by 2011 self-published authors will be able to hit the Top 25 [in the Kindle Store sales rankings]?”

Not to crow, but it’s worth mentioning here that my self-published guide to the Kindle 1 spent 17 consecutive weeks in the #1 position in the Kindle Store during the Spring and Summer of 2008 before going to paperback in late August, and my Complete User’s Guide To the Amazing Amazon Kindle 2 spent some time in the top 15 when it came out earlier this year. There have, along the way, been other self-published titles in the Kindle top 25, and they have not only been books about the Kindle. But while it will continue to be interesting to plot the progress of individual titles, I suspect the more interesting sea changes will be those involving the kind of publishing perestroika that I write about in my Beyond the Literary-Industrial Complex: How Authors and Publishers Are Using the Amazon Kindle and Other New Technologies to Unleash a 21-Century Indie Movement of Readers and Writers, including its chapter “Rebel Distribution and Amazon’s Marketplace of the Mind: You Need a Publisher Like a Fish Needs a Bicycle.” As these sea changes evolve, the “self-published” label will cease to exist in any meaningful way except inasmuch as it means “smart,” and will be replaced a kinder, gentler sense of “indie author” and “indie publisher” that is embraced by readers, by authors who previously had chosen traditional publishing routes, and, of course, by the DIY renegades among us.

It’s the Real Thing: A Meditation on Immortality and Commerce
The Romance of Submission