Writing styles change and trend. For a quick look on how to finesse utilizing backstory to give your writing a current flair check out the article from Rachelle Gardner at Books & Such.

What’s the Story on Backstory? 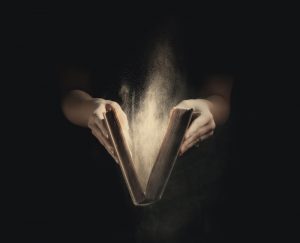 One of the biggest challenges for novelists—new and seasoned alike—is avoiding too much backstory in the opening of the book. A lot of people ask me questions about backstory, and often argue with me about it. So I wanted to give you some tips here.

Backstory usually refers to narrative that tells something about a character’s past. It’s given in an informational style without real-time action or dialogue. Backstory doesn’t show, it tells, thereby risking losing the reader’s interest.

Stacy Clarke rounded the end of the canned food aisle and brought her cart to a halt, barely avoiding slamming into the six-foot hottie organizing the Cheez-Its display. He glanced at her and smiled, shaking his longish bangs away from his eyes. She lowered her eyes and mumbled as she maneuvered around him. Ugh. Another opportunity blown. Why was she always such a dork?

Stacy had worked at this supermarket for two years before she’d quit to take her current job as a receptionist. She’d always been shy, and the guys had stopped trying to get her attention once they realized she wasn’t responding. It had been five long years since she’d had a boyfriend, and she was tired of being lonely.

Obviously I made this up, but it’s a close approximation of something I see all the time. Look at the second paragraph. It took us totally away from the current place and time. It took us away from the action—in fact, it stopped the action in its tracks. It’s backstory.

Usually when backstory isn’t working, it’s because it isn’t artfully done, and there’s too much of it in one place. When there’s a whole paragraph, or a page or more of backstory, we call this an info-dump.

Quick Link: Yes, You Can Publish a Book (Here’s How)
Quick Link: 5 Essentials to Establish Before You Start Plotting (or Writing)