By Steve Windwalker on August 11, 2012 in Uncategorized

I’m off for a couple of weeks on the Cape, but with greater than ever peace of mind for two main reasons.

First, more than ever, it’s a terrific feeling to leave KND and our various sister sites in the especially capable hands of Candace, April, Paula, Mark, Sue, Betty and Tom. We’ve been around for nearly five years now and we’re still a tiny start-up, but we’ve been extremely lucky in our efforts to build a team of people who are passionate about reading, writing, the Kindle, and the work we do to connect great readers with writers of distinction. 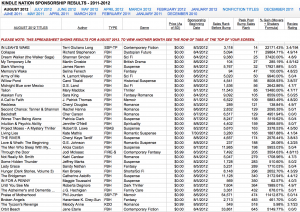 Second, it’s an especially good feeling to be heading out on vacation with the knowledge that we’ve been making a real difference for some of those writers of distinction lately by turning their sponsorships into very positive exposure to our ever-growing readership base. You can check out our sponsorship options and book your own dates anytime at our Kindle Nation Sponsorship Info Page for Authors and Publishers, and you can always see for yourself on our public Sponsorship Results spreadsheet, but among the dozens of success stories during the last month or so, here are a few that stand out:

I could keep going, but I really am supposed to be on vacation….